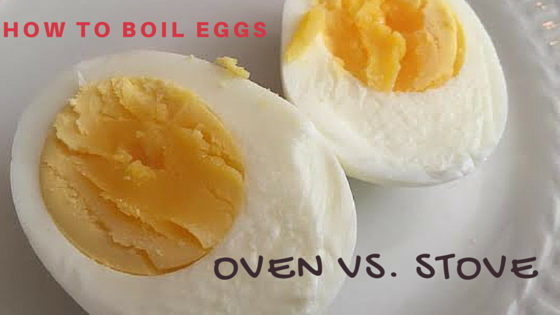 If you think of yourself as a chef or serious cook and keep up with cooking trends, you’ve seen the videos, blog posts, etc, recommending preparing eggs in the oven vs. boiling them on the stove top as Grandma did. Touting the ease of preparation, I didn’t know boiling water was such a chore. Wasn’t there are Food Network show called “How to Boil Water,” a testament about how easy it is to cook? Baffled as to why a longer cooking process that uses more energy would be better, we tried it and here’s what we found.

First, the process:
You will need a muffin / cupcake tin to make hard boiled eggs in the oven. Put as many eggs as you’d like to make. We decided to experiment with 6 eggs in case they were a flop (spoiler alert: they were). Bake the eggs for 30 minutes at 350 degrees. Oven temperatures may vary, but 350 seems to be standard based on all the articles and videos on oven baked eggs we found.

How did the Oven Baked Eggs Turn Out?
Taking the eggs out of the oven, the first thing we noticed were the dark brown spots on all them. It seems to be caused from where the eggs touched the edges of the tin. When peeled, the spots had permeated through the shell to the egg. While the spots didn’t affect the taste it certainly made them less visually appealing. They also had an unflattering dark ring around the yolk, that never results from water boiling. Since I always immerse eggs in ice water after they are done boiling, I don’t know that the peeling process was any different using the oven. It certainly didn’t seem any easier. But how did the eggs taste? The eggs were drier and with much less flavor than when they are cooked on the stove top.

No photo editing was done on the pictures of eggs used in this article.

The Verdict:
Don’t make oven-boiled eggs. Looking at the pictures above, which would you rather eat? The taste and appearance are both inferior to the traditional method of boiling eggs on the stove top. Not to mention, it is a huge waste of energy. In the time it takes for most ovens to get to 350 degrees, you could boil a small pot of water and cook your eggs for the required 10 minutes, resulting in perfectly prepared hard boiled eggs.

Tip: No matter how you make your hard boiled eggs, they tend to peel easier if they’re at least a week old vs. brand new eggs.