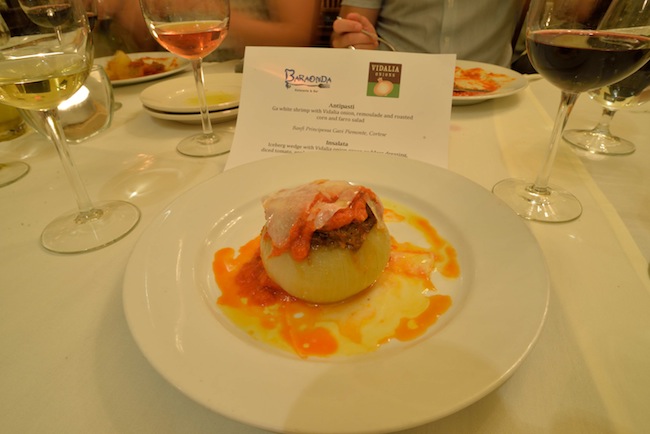 Vidalia oninons were discovered accidentally in the 1930s. They’ve become extremely popular in recent decades.  They are so popular in fact, that they are now widely available in grocery stores across the country from April to mid September.

We were invited to attend a multi-course dinner in Atlanta, featured the Vidalia onion. Our first course began with a lovely Shrimp and corn salad and was paired with Purato Rose Sicilia, Nero d’Avola wine. The sweet Vidalia onions were the perfect touch to this starter. Another salad, this time a Wedge with ranch and bacon was another good use of the Vidalia onion and was paired with Banfi Principessa Gavi Piemonte, Cortese . Moving on to more of a substantial course was the Pan-seared red snapper with Vidalia onion, red cabbage and fennel slaw with citrus vinaigrett Satrico Bianco Lazio, Chardonnay-Sauvignon Blanc-Trebbiano.

Up to this point the dishes were impeccably paired with wines, but the highlight of the evening was the Braised beef stuffed Vidalia onion with tomato sauce and shaved pecorino (see image at top). No other dish truly highlighted the Vidalia onion as did this. It was paired with a red blend – Cabernet Sauvignon-Merlot-Petit Verdot-Cabernet France that was utterly delightful.

Oh and they didn’t forget about dessert. We were treated to a Vanilla bean gelato with Vidalia onion and aged balsamic jam. My, oh my, the “oohs” and “ahhs” that everyone kept uttering with this dish. No doubt everyone wondered how they would pull off an onion-based dessert. But the balsamic an onion complimented each other quite well. It was a pleasant departure from the average overly sweet desserts found elsewhere.

Vidalia onions are only grown in a 20-county area of Southeast GA.

In 1977 they were named the official state vegetable of Georgia.

They are a good source of Vitamin C, are fat free cholesterol free and sodium free.

Disclsoure: Our meal was complimentary but the opinions expressed are my own.