We all like to think of ourselves as web savvy individuals. When I hear about someone falling for an internet scam, I feel sorry for them but there is a little voice in the back of my mind that says “Really, they got duped that easily?” However, scammers are getting more crafty with their scams and now there is one directly targeting us bloggers. It also seems that during the holidays we may not be as “on guard” as we normally would be. So I wanted to share the news of this blogger scam before anyone else falls prey.

I was contacted by a so-called advertising agency (Lemma Agency) that requested a quote from me to place a banner ad on my food blog. The person told me they represented Lacoste, a manufacturer of luxury goods. It was curious that a well-known brand would want to advertise on a food blog, but the inquiry seemed innocuous, so I responded with a price.

Here’s where the suspicions grew. My price (higher than I’ve ever gotten paid for any banner ad) was accepted almost immediately with no negotiation. The person responded asking me to visit their site and download a wordpress plugin to be installed on my site. A quick google search led me to several posts from others who were approached with the same offer. 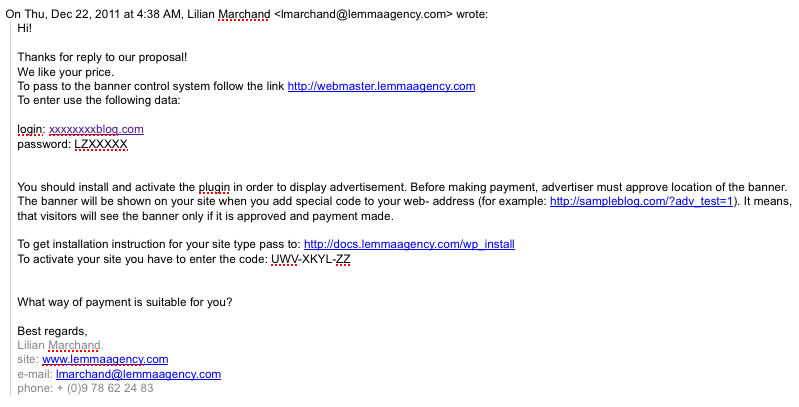 The site (lemmaagency.com) is bogus and has been found to be duplicated on other domain names. The fact that the emails had some grammatical errors were a clue that the Lemma Agency was not legit. I also found evidence that the site owner is from Indonesia, although the agency claims to be French. While I haven’t found any information that explicitly details what the plugin does to your website, I am not about to risk my site and personal data on my computer to find out and suggest you do the same.

If you own a WordPress self-hosted site, beware of any advertisements that require you to install a plugin to advertise. Any legitimate advertiser should simply be providing a link to where the banner image is hosted and perhaps a tracking code. Nothing more.

Here’s some advice:
If an offer seems to good to be true, it probably is.
If the email is written with poor grammar, it is probably a scam.
Only download plugins from a trusted source or directly from WordPress.org.
Realize that any plugin can have code that could have drastic effects on your computer.