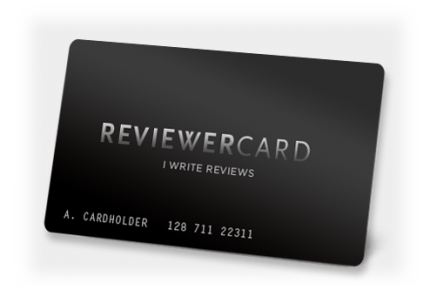 Some time ago, Yelp gave their reviewers cards that read “You’ve Been Yelped!” I guess the restaurant should feel a bit of panic at the idea, unsure if their food and service was up to snuff for the yelper. Will they get a 2 star or a 5 star review? In the meantime, Yelp gets the word out. Now there’s a new card in town: the ReviewerCard.

When I saw the Yelp cards, I thought to myself who would have the gall to leave these cards? Little did I know I just had to wait a couple years for an even more ballsy card to carry. It is called the ReviewerCard. The difference is that you whip this sucker out BEFORE your service. Basically, it tells the restaurant you are a badass reviewer and have a ton of social media profiles so they better give you top notch service…or else. Well not exactly, the threat is implied. Kind of like when you park your car in a sketchy neighborhood and someone offers to “keep an eye on it” for a five spot.

A quick perusal of the ReviewerCard site shows a lengthy questionaire for membership and a statement that everyone is accepted, according to the Reviewer Card site. The site states that the cost of the card is free, though many articles state it is $100 to get the card.

Since it’s inception, there’s been a backlash between the restaurant community and food writers. Some of the words used to describe the card are “blackmail” “unethical” and “extortion.” Though the ReviewerCard site states “Members will get to enjoy the premium service they deserve, while continuing to provide insightful, honest, and valuable reviews to other customers.”

Should it be as easy as flashing a card to get a hotel room at half off? Be put at the head of the line for a table at a popular restaurant? Freebies when dining out? What about the other paying customers that don’t enjoy those benefits aren’t they entitled to be treated well too?

As bloggers, some of us enjoy media events with fabulous food, but it comes because we are good at our craft, have an engaged audience and readership, and truly want to share our passion for food, not because we threaten to post negative reviews. I hope restaurants and other establishments see the ReviewerCard for what it is and not be bullied into giving steep discounts and freebies.