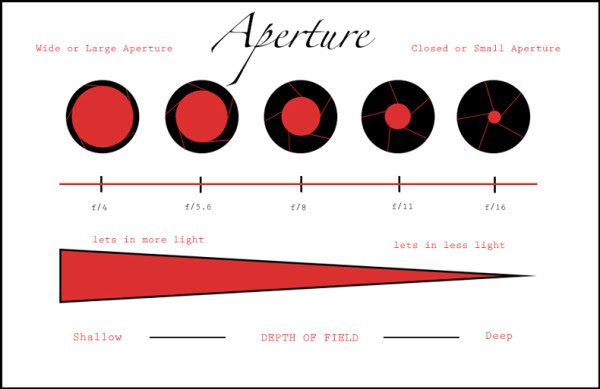 Making the switch to manual photography is a bit like taking a leap of faith. All the fancy buttons and menu options on a DSLR camera can be intimidating and there is a lot of new terminology and concepts, such as aperture, shutter speed and ISO, to master. I learned how to shoot in manual by taking an introductory photography class when I was living in NYC about six years ago. My teacher was a big proponent of manual, so that’s what I learned and I’m forever grateful for it.

Why Shoot in Manual?

Cameras are pretty amazing these days and you can get some really nice pictures just by pointing and shooting with your camera on automatic. It’s easy, the pictures are generally decently exposed and you can move from situation to situation quickly without having to make decisions about and adjustments to your shutter speed, aperture and ISO.

The down side is that your camera makes all those decisions for you. Right now you may be thinking, “Hey, that’s great. I don’t want to mess with all of that!” I hear you. A few years ago I was in the same boat, but I’ve come to appreciate the benefits of having control over how my image turns out.

Fig. 1 – For demonstrative purposes, I took these pictures using the automatic settings on my camera.

Let’s take a look at the pictures in Fig. 1 above.

I used the basic automatic setting for the first picture on the left. Sadly, the camera decided that it should use the flash. The built in flash on cameras tend to be, well, not great. You can see how the lighting is kind of uneven and the image looks flat. So, not a great image.

For the next two images, I used the automatic with no flash setting. I think the images are much better; a little underexposed, but they have a lot more depth. If you have editing software you can fix the exposure issue, so, while not ideal, it’s fixable. The issues with these photographs lie in the other decisions the camera made.

You may have noticed a pretty blatant different between the second two pictures. (Hint: it’s the focal point.) The middle picture is focused on the basket of strawberries in the background while the picture on the right is focused on the shortcake in the foreground. You’d think that, with a difference like that, I must have done something differently. Nope. The only thing I did between the two photos was press the button.

So the camera made a pretty significant and apparently arbitrary decision about what was the focus of the picture. You may have your own ideas about what is important in a picture; I know I certainly do. Shooting in manual gives you the control to choose where the camera focuses, rather than having to rely on the camera’s software to make that choice for you.

(A lot of point and shoot cameras these days can recognize and automatically focus on faces.  Alas, by the time you’re photographing your food, it probably doesn’t have a face.*)

Aperture and Depth of Field

Shooting in manual allows you to select the aperture at which you shoot, which gives you control over the depth of field if in the image. Don’t worry if you don’t understand what I just said. I’m about to explain.

Aperture refers to the hole in your camera that lets in light. Much like the pupils of your eyes, the larger or wider the aperture, the more light it lets in. The smaller the aperture, the less light that gets into your camera. This works in conjunction with the shutter speed to determine the exposure of your image.

Aperture is sometimes referred to as “f-stop” because aperture is written as f/[number]. The larger the denominator, the wider the aperture. In other words, f/5.6 means that there is a larger opening than f/16. It’s a little counter-intuitive at first, but if you think of it in terms of fractions it makes sense. (1/5th of a pie is a larger piece than 1/16th). 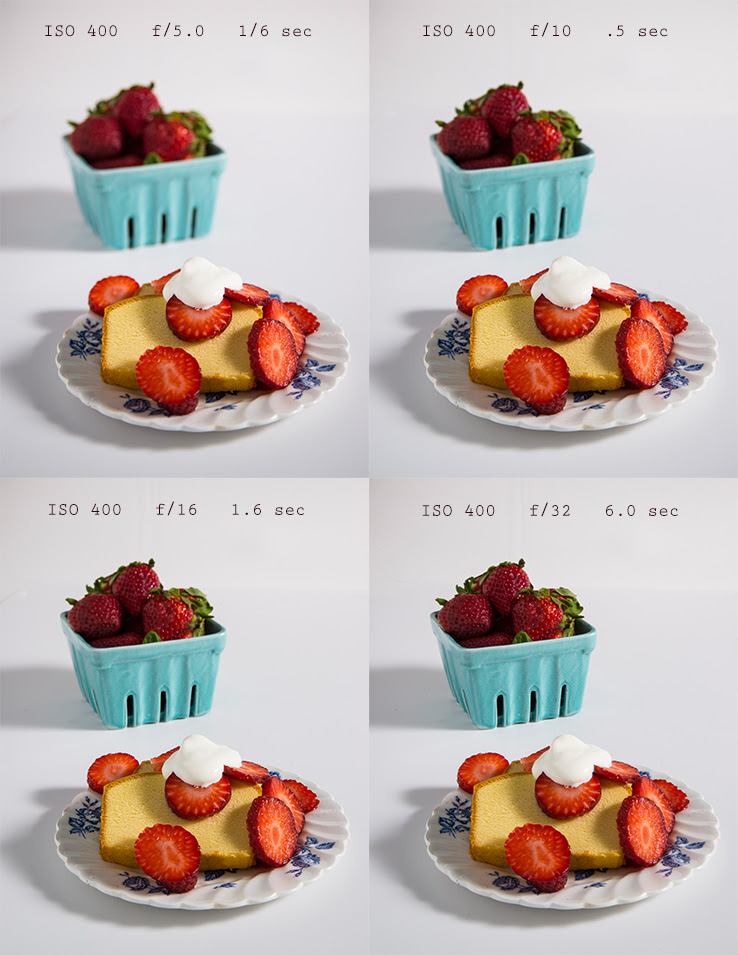 Fig. 3 – These images were shot using a tripod. Note the long exposure times.

The focal point for all four of these images is right in the middle of the strawberry with the whipped cream on it. The basket of strawberries in the background is very blurry in the top left image where the aperture was f/5. This image has a shallow depth of field. You can see how the basket gets sharper as the aperture gets smaller, creating a deeper depth of field. The basket is sharpest in the bottom right corner where the aperture is f/32. The focus of the foreground changes as well, but the change is subtle in these pictures.

In Fig. 1 above, where I shot in automatic, the camera chose an aperture of f/5. That means it chose to have a shallow depth of field like the top left image here in Fig. 3. But what if you kind of like that adorable little ceramic basket you got on sale at Anthropologie? You might want it to be a little more in focus. If you’re shooting in auto, you don’t get to make that decision. 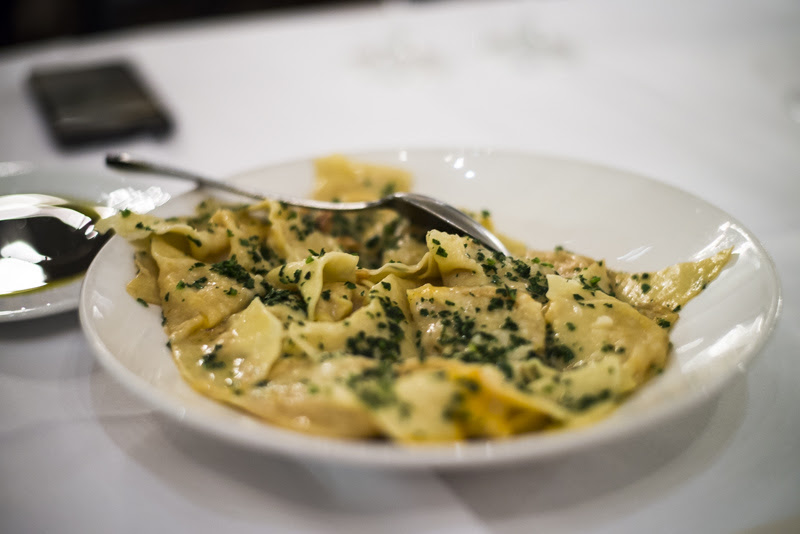 Food Photography Fail. I defaulted to auto one day when photographing in a restaurant. Wrong decision.

This image is an excellent example of what can happen when you let the camera make the decisions. I was in a restaurant and a little shy about whipping out my enormous camera during dinner. So instead of taking the time to get my settings right, I just used auto. Of course, it was dark in there and my camera used a wide aperture to let in more light, which ended up creating a very shallow depth of field. Only a sliver of the dish is actually in focus, which is less than ideal, to put it mildly. I learned my lesson.

Whoa Morgan, you just said something about it being dark and using a wide aperture to get light and what’s going on?

Don’t panic! This just brings us to…

So, aside from making decisions about aperture and depth of field, we have get the right balance of aperture, shutter speed and ISO to have a properly exposed image. That basically just means that the photograph is baby bear. It’s not too dark and it’s not too light; it’s just right. Now, contrary to what Foodgawker and Tastespotting might be telling you, exposure is somewhat subjective. Yes, there’s absolutely overexposed (too bright) or underexposed (too dark) images, but there’s a lot of gray area in between. (pun intended) 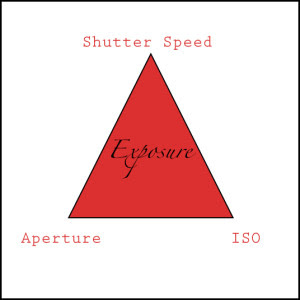 Think of it as a faucet. If you want to fill up a glass of water, it will take longer to fill the glass with the water at a drip versus when you turn the faucet on all the way and the water rushes out. (aperture = drip/stream, shutter speed = the time you hold the glass under the faucet)

A word of warning regarding shutter speed: the longer the shutter is open, the more likely you are to shake the camera, leading to sad, blurry images. If you shoot regularly in low light situations like, I don’t know, your kitchen, you may want to invest in a tripod. Similarly, if you’re photographing something that moves, the longer the shutter speed, the more likely that thing is to be blurry.

So why would we ever use a high ISO? Like most things, there’s a trade off. Shooting at a higher ISO is the equivalent of using a longer shutter speed or a wider aperture: it increases the exposure.

So let’s say you have the perfect aperture, but your image is a little dark and you can’t reduce the shutter speed anymore because the camera will shake or the subject is moving, you can try bumping up the ISO to get the exposure where you want it.

So in the end, exposure is a balancing game between aperture, shutter speed and ISO. It may be a little complicated at first, but I have confidence in you. So what does all this complicated gobbledygook get you? Control. Manual photography lets you tell your camera how to get the image that you want, rather than settling for what the camera tells you you’re going to get. And that’s the beauty of shooting in manual. 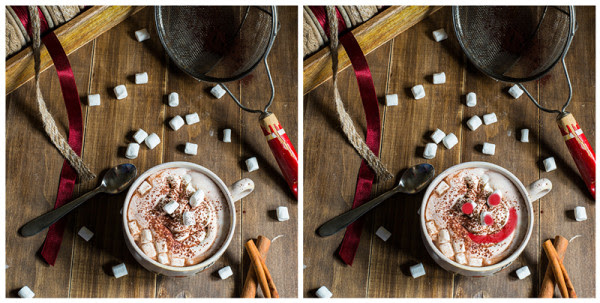 *This would be one of the exceptions to the no faces rule. And that just can’t be unseen.
By Morgan Perkins
Morgan is the author of Peaches, Please! a delicious blog that talks about recipes, food photography and more! She is a recovering attorney, that hails from a family of foodies. And yes, she LOVES peaches!