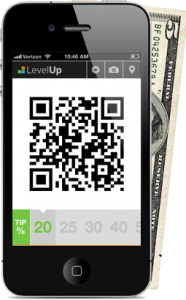 Back in the late 90s when people were just beginning to use cell phones, the idea of a smart phone was unheard of. Those on the forefront of technology and forecasting predicted that there would come a time in the not-so-distant future that we would be able to pay for goods and services using our cell phones. This seemed unfathomable, yet here we are with this option. While there are several apps that allow users to pay with their cell phones, LevelUp is a newcomer, hoping to gain some market share.

LevelUp is free to use for consumers and available nationwide, currently available at more than 3,000 restaurants and stores across the U.S., including well-known fast-casual restaurants like Ben & Jerry’s and Subway in addition to small local food trucks and coffee shops and restaurants.

To use it is rather simple.
1.) Go to their website and sign up. You’ll need a credit card to link to your account.
2.) Download the app on your smart phone (iPhone or Android)
3.) Show your unique QR code to vendors to pay for goods and services

Once you register for LevelUp and download the app to your smart phone, you’ll have your own unique QR code. Think of this like a credit card. To pay, simply hold your phone up to the vendor’s phone and the payment process should take less than a second. You are notified on your phone how much as been deducted from your account and an email is sent to you for your records.

My first experience using LevelUp was at a Food Truck Park. How great is it not to have to pull out my wallet each time I want to get a taco or bubble tea? While it is convenient, there are some downsides to LevelUp too. Several businesses listed as accepting the app refused to take payment from it. Others had issues with their phones not being charged or getting a signal to accept it. My tacos got soggy waiting for the payment to be accepted. 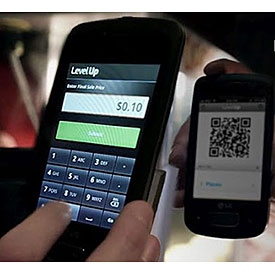 What about security? If your phone is stolen does that give the theif carte blanche to go charge up a bunch of things using LevelUp? Not necessarily, but it is up to the user to be vigil about this. For example, you can pin lock the app to ensure someone couldn’t gain access to LevelUp, plus you can reset your unique QR code instantly from your account online,rendering your old one invalid. To start using LevelUp sign up on their site here.