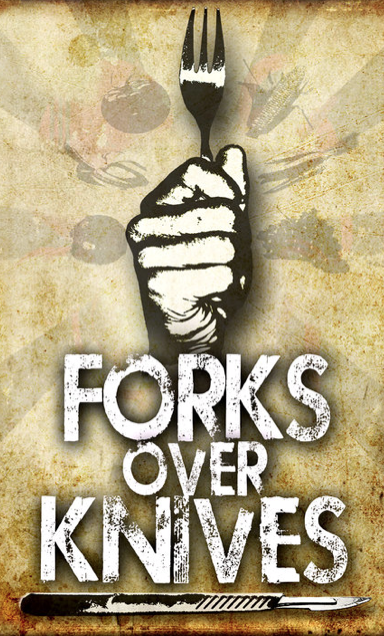 Last week, we went to see the movie Forks Over Knives. This is the documentary that makes the case for eating a plant-based diet. The film follows a couple of doctors that have adopted this way of life and recommend this plant-based diet to their patients. The doctors, now both in their seventies are still thriving and living full lives.

It is probably a fair assumption that most people would argue that a diet low in fat or one where we consume small portions of meat with the bulk of nutrition coming from fruit, vegetables, fish and dairy would be the healthiest, right? Here’s what is a little different about the claims made in the Forks Over Knives: they want you to give up dairy as well as ALL meat including fish. They argue that if it had eyes, a tail, fins, or came from something with any of those features than it is bad for you.

This was a little surprising to say the least. Most of us have been told from the time we are kids that we get lots of Vitamin D from Milk and that a little bit of protein is good for us. We’ve also been told (at least in the last 10 – 15 years) that fish are high in Omega-3 which promotes good health.

During the course of Forks Over Knives, we are taken through numerous studies of lab rats. Some rats were fed a consistent diet of only plant based foods. Some were fed a mix of meat and plant-based foods. In the studies, all those that consumed any meat had instances of cancer cells forming and heart disease. However, those that ate a plant based diet had no instance of health problems. What’s more is that when researchers took them off the meat diet and put them back on plant based foods, they started getting healthier in just weeks.

But this wasn’t only the case in lab testing with animals. One doctor that encourages his patients to live off a plant based diet. Dr. Caldwell Esselstyn, has seen it work in his patients, even in those extreme cases where patients were told they would be on medication to treat Hypertension, Diabetes and other Cardiovascular diseases for the rest of their lives. With these patients, we are shown how over the course of several months they are able to not only get off their expensive pharmaceutical drugs, but also reverse the damage that had already been done.

So why has our government not done more to encourage this kind of diet? Simple. It all boils down to money. Many policy makers are lobbied and paid off by big corporations to pass laws that will benefit them.

* The American Dietetic Association is controlled by Food Corporations. They make processed foods that are full of high fructose corn syrup among many other bad-for-you ingredients. Of course they don’t want us to stop buying their foods.

* The Insurance Industry and Pharmaceutical companies only stand to make money when people remain sick, so why would they want us to eat a healthy diet?

* And of course in most of the medical profession, they are trained to encourage patients to pop a pill rather than have diet modification and are handsomely rewarded for writing a prescription rather than encouraging a healthy lifestyle. It was simply amazing that one of the women in the study, who was diagnosed with diabetes, worked in a Diabetic Clinic and was only given meds, not told to modify here diet in any way.

Some key points of the movie to ponder:

* “One quarter of what you eat keeps you alive. The other three quarters keeps your doctor in business”

* “If we redirected the amount of feed for animals to people, we could wipe out hunger”

So, what do you think? Is that what America needs to do? Even if you don’t agree with cutting meat or dairy out your diet completely, it is worth seeing the documentary, Forks Over Knives, and hearing what they have to say.