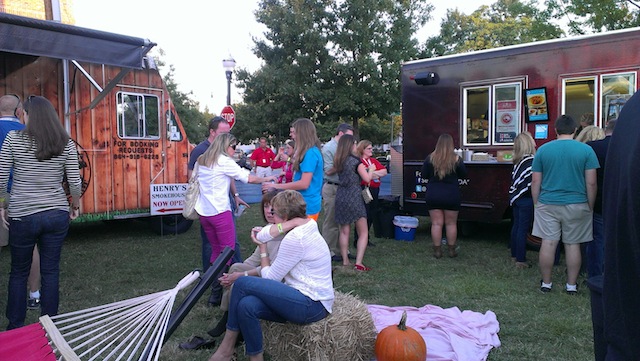 Food trucks are all the rage these days. They’re convenient, offer tasty food and hold a ton of personality. Restaurants may not agree, however, only because food trucks are taking away some of their customers and revenue.

During the American Civil War, cattlemen looked for simple ways to feed other cattlemen while herding through Texas. Chuckwagons then emerged, selling food to herders, now known as food trucks. Since then, food trucks have resurged due to the downed economy. Restaurants that lay off chefs are one example why food trucks have grown over the past few years. New opportunities have emerged for experienced chefs who don’t have jobs and need to make money.

Social Media has played a huge role in the popularity of food trucks. Fans can follow the trucks on Facebook and Twitter to find out when and where they will be. Loyal customers will drive many miles to support their favorite food trucks.

The Current State of Food Trucks
Food trucks are taking advantage of every opportunity they can, pinching every penny and fighting any restrictions that affect their business. You’ll see them frequently rolling around in larger cities, but they’re popping up more and more in smaller cities and college towns. Why? People are always looking for more convenient ways to eat some tasty, affordable grub.
Their convenience and small kitchens also make for great food outlets for special events, music festivals, parties and other public or private gatherings. They’re small enough to not take up a large amount of space and mobile enough to cater to any special event.

Restaurants haven’t really changed much, except from the fact that there are more of them…a lot more. So many restaurants exist that if you lived in a large city, it could take you years to try every one. It’s a growing market, especially as people’s lives get more hectic.

Hardships
Food trucks are a difficult business. They fight many restrictions and regulations that cut down on their revenue. Food truck owners in larger cities, such as Chicago, are a great example. They have many parking restrictions and only recently have been allowed to cook onboard with proper licenses, rather than offsite kitchens. They can only park for 2 hours at a time and have to be at least 200 feet away from restaurants.

Restaurants also have their own hardships. Over the past few years, they’ve had to let workers go due to poor economic health, which inadvertently created more competition for them because some of these people started their own businesses…food trucks. In addition, with the passing of the Affordable Care Act, restaurants will have to pay more towards health benefits, which will affect how much they can pay or even keep their employees.

The Ongoing Battle
The fact of the matter is, restaurants don’t like food trucks, food trucks don’t like restaurants and both parties have difficulties with regulations passed down upon them. In larger cities, restaurants seem to have a larger voice, which can influence the way laws are passed. Food trucks, particularly in San Diego and Chicago for example, have been upset at some of the regulations enforced upon their operations. They’ve missed out on opportunities to make money due to some of these restrictions, but if you look at it from the restaurant perspective, is it fair if a food truck parks right outside a brick and mortar establishment?

Can’t we all just get along and enjoy some food, whether it’s at a table or on a street corner?

He  writes for Willies Restaurant in Columbia, Mo. Willie’s is known for their tasty wings since 1994.