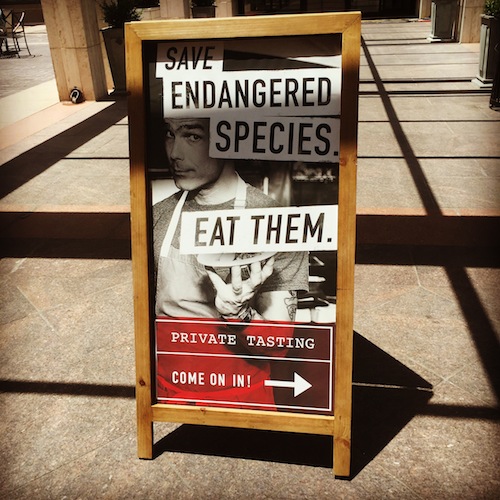 Many media folks received a rather cryptic email invitation to an event at Top Chef Hugh Acheson’s Empire State South.  Here’s what we were told:

“Endangered Eats is s a one-day only tasting menu featuring endangered species; hosted by celebrity chef Hugh Acheson at Empire State South in Atlanta. By eating these rare species, we can help save them.”

Arriving to meet a crowd of media, bloggers and giddy extras, we waited and waited while a team of camera crews and important looking people wearing microphones darted in and out of the restaurant. Staff came through the line offering up small tastes including a Whisker Shooter and Dangerous Curds.

In groups, we were guided to various tables, still not quite sure what was going on. Shortly after being seated the magical Acheson appeared and uttered these words:

“I am not going to tell you what you are eating until afterwards, but it is nothing unethical and nothing illegal. Just keep an open mind and have fun.”

What proceeded was a three course meal, made of meats not quite identifiable for the most part. The first, Thump in the Night, a bright red “meat” with various vegetables. A second course, served as a block of meat, with beautiful lavender flowers atop was called the Fowl Play and a third course, Running Scarce, was a served with a lovely tomato and rice.

So, finally time for the big reveal. What was this endangered “species” we just consumed? Acheson appeared and the room got quiet in anticipation of the announcement. “There was just one endangered species,” he said,”a tomato.” The Cherokee Purple Tomato is in danger of becoming extinct. Acheson urged all of us to pay attention to these kinds of fruits and vegetables as much as we would an endangered animal and sent us on our way with a pack of seeds for the Cherokee Purple Tomato.

In case you were wondering what the meats were:
Thump in the Night (Beef Heart)
Fowl Play (Guinea Hen)
Running Scarce (Pork Tenderloin)