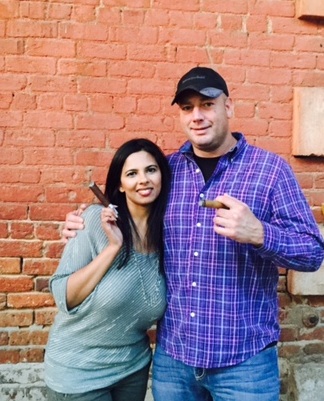 CigarBQue is an intimate evening of fine food prepared by some of the country’s best chefs. Cigarbque is a traveling festival. CigarBQue was started when three chefs from Chicago got together to combined their love of food, entertainment and cigars. It turned into such a success they decided to take it across the country, with Atlanta being the kickoff city.  Atlanta’s event took place in Downtown Atlanta’s Georgia Freight Depot. CigarBQue features chef’s barbeque-like creations, creative cocktails, wine, beer, and the world’s finest Diamond Crown Cigars.

About the Cigars (Taken from Diamond Crown Cigar website):

Each Diamond Crown cigar passes through three inspections and is aged in lots of 50 in cedar curing rooms for a minimum of twelve months. From the 50 cigars in each lot, only the 15 most perfect in appearance, firmness and wrapper texture are approved by experienced inspectors for placement in the Diamond Crown cabinet, along with a numbered Certificate of Inspection.

Diamond Crown’s exceptional taste comes from the five-year-old Connecticut Fermented Wrapper. Unlike most quality tobacco wrappers, normally given a single fermentation, Diamond Crown wrappers are conditioned, graded and selected for a second fermentation. It is this second curing that evens and develops the rosado color of the tobacco wrapper and eliminates any potential rawness, accounting for much of Diamond Crown’s sweet, smooth, richer flavor.

The venue for Atlanta’s Cigarbque, the Georgia Freight Depot, is a beautiful space perfect for events such as Cigarbque. It is a wide open space inside with plenty of room for food and drink vendors to set up. There’s also a lot of outdoor space for Cigar smoking. Cocktails made with ingredients like rhubarb and peppers were creative. While food was was decent for the most part, there were only a handful of vendors, five to be specific. While we didn’t leave hungry, I would’ve liked to see more variety.

Lines weren’t long even with few vendors, due to the high ticket price, I’m guessing. So, it was disappointing that some vendors ran out of food two thirds of the way through the  festival. Tickets to Cigarbque are $125 and can be purchased here.